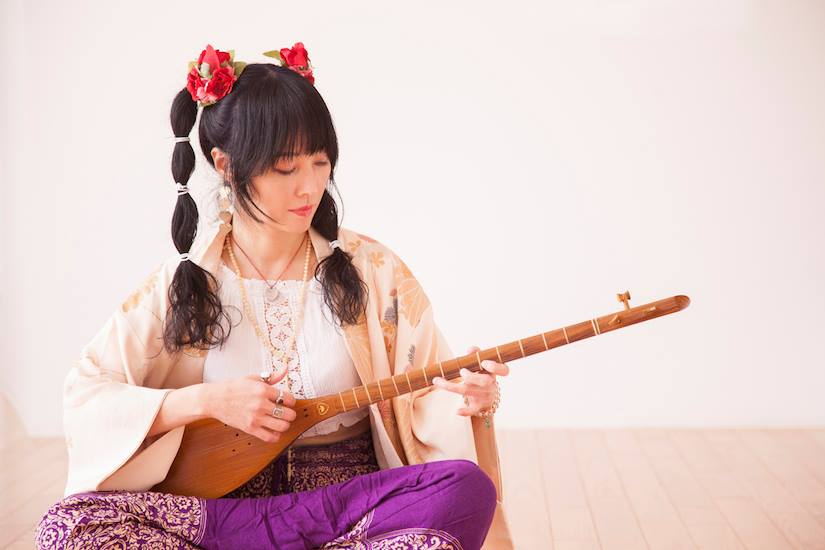 Join us Thursday, Feb 21, 2019 at 7:15 pm for our monthly Healing Circle + Whirling (Sufi Dance) + Prayer led by CRS co-founders Yasuko Kasaki and Christopher Pelham and Sufi Dance Artist Lale Sayoko. We gather to let go of our small selves and remember our divinity within. Musician Lulla LayLa will be with us to play the tanbour and sing during our whirling.

Bring in any issue — relationship trauma, #metoo, disease, money issue, depression — and surrender it to Spirit. Remember who you are. Receive new guidance. Experience love’s presence. Heal yourself and others.

Sufi Dance Instructor Lále Sayoko was one of the founding members of Japan’s famous Samanyolu professional bellydance group, and has since developed her own solo career touring with UK’s Mugenkyo Taiko Drummers on a 44 city tour of the UK, to Turkey’s Baba Zula, to New York’s Bella Gaia multimedia Earth from Space journey show. Appearing in Japanese and American magazines and newspapers, Lale aspires for dance to be a powerful communicator though traditional technique and spiritual embodiment. She has lately been studying Sufi dance with Rana Gorgani and in April 2018 Gorgani awarded her the International Sufi Dance Certification Of Cid UNESCO, granting her authority to teach Gorgani’s method of Sufi dance training.
http://www.lalesayoko.com

Yasuko Kasaki (meditation/prayer) is an internationally beloved spiritual writer, counselor, healer, lecturer and translator from Tokyo, Japan. The founder of CRS (Center for Remembering & Sharing), the first and only spiritual center devoted to the teaching and practice of A Course in Miracles (ACIM) in New York City, she is widely recognized as the person most responsible for the spread of ACIM throughout Japan. She has taught and worked with thousands of people from around the world to help resolve their mental and physical issues and witness miracles. She is the author of 16 books in Japanese about ACIM, as well as numerous novels, short stories, essays and collections of photographs. Her translations of the ACIM Workbook and books by ACIM writers Jon Mundy, Gabrielle Bernstein and David Hoffmeister and others have also been published in Japan. Meditation and communication with Holy Spirit form the foundation of her classes.
http://www.yasukokasaki.com

Christopher Pelham is a spiritual healer/counselor/teacher/artist who draws on practices from ACIM, Non-Violent Communication, improvisational theater, Sufism, and contemporary shamanism to help people remember who they really are. He is the Director and co-founder of CRS (Center for Remembering & Sharing). He has also taught and/or offered healing in London, in Japan, at the 2018 Awakening to the One Mind Retreat, and at the 2017 Enlight Festival of A Course in Miracles in Ibiza, Spain.

Lulla LayLa is a Japanese Singer Songwriter, Composer and Singer originally based in Tokyo, Japan. Since 2000, she has made her creative home in New York City. Lulla LayLa’s music has Japanese traditional elements combined with a psychedelic/contemporary world folk sensibility. Her music delivers haunting piano ballads about love and many other subjects. Since 2017, she has also been composing songs with and accompany herself on the Kurdish tanbur. With this instrument, her sound takes on an even more exotic folk sensibility. The theme of her songs/poems never changes, but when writing for tanbur she does utilize a more simplified lyric with a repetitive structure that will leave a magical impression on your heart. You may also find these songs to be influenced by Sufi music. On several occasions audience members from different parts of the world have said to Lulla LayLa, ” Your music makes me nostalgic because your music seems like my country’s music,” even though she was not familiar with or hadn’t heard their country’s songs. She loves the idea of folk or devotional music bringing people together. Lulla LayLa says, “We all know that the original songwriter of all lyrics and music is one, as we all know that our original home country is one.”
https://www.facebook.com/lullalaylatunes/