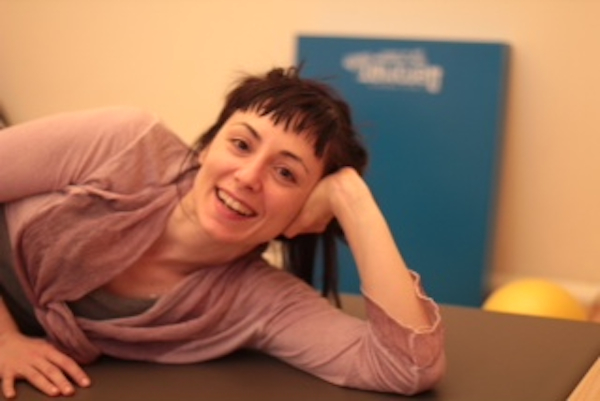 Part 1 6:30 – 7:15 pm Tools for Grace Secrets with Flavia Bruni
Part 2 7:15 – 8 pm​ Revivo Pilates with Noemi Di Gregorio
Class Fee:  $25/class or 5 classes for $115
Flavia and Noemi offer a Pilates and Movement class which create healthy, centered, strong and flexible bodies plus  an elegant image. The joy and the quality of movement in everyday gestures are the elements that distinguish our classes. To learn to move with elegance in daily life through a centered body, to be purposeful in movement or just to simply feel the pleasure of being alive, that‘s what we convey to our students.
Free class and aperitivo Wednesday, November 6, 2013:
Come try a free class and stay after for an aperitivo and to learn more about the classes, upcoming workshops and offers for winter 2013/14. The class will start at 6:15 pm and will end at 7:15 pm.

About the Class
The class consists of two parts, each 45 minutes. The two parts are complementary with the goal of achieving both an elegant posture and an agile and strong body.
Tools for Grace Secrets with Flavia Bruni 6:30 – 7:15pm
The first part of the class will help you to free the body of contractions that restrict normal movement.  It will also tone the deep muscles by teaching you how to use your body in a way that respects its original design so you move effortlessly through life. Flavia Bruni’s Secrets are a way to rediscover a body born to be naturally graceful, beautiful and strong. Flavia’s work is strongly influenced by her experience as a dancer.
www.toolsforgrace.com
Revivo Pilates with Noemi Di Gregorio, 7:15 – 8 pm
During the second part of the class, Noemi Di Gregorio will, through smart movement sequences and a focus on breath, strengthen and energize your body. You’ll achieve a greater awareness and connection between mind and body which results in becoming more powerful both physically and mentally. This power can help you succeed in all aspects of life, whether it is professionally, personally or athletically. Noemi’s work is influenced by her life-long experience as an athlete and performer.
www.revivopilates.com
About Flavia and Noemi
Flavia‘s and Noemi‘s work is strongly influenced by their experience as dancers and figure skaters, the appreciation of the strength that comes with being deeply aware of the body, a  passion for teaching and from happily being Italian.
Flavia Bruni, originally from Italy, became a professional dancer when she was fifteen years old. For the last ten years she has been a Pilates instructor, teaching in Bologna, Milan, and New York.
After graduating from the Liceo for Science, Latin and Philosophy in Bologna she obtained her Bachelor ‘s degree in Psychology from the University of Bologna.
In 2004, Flavia moved to New York. Here she continued both her dance career and her studies – deepening her understanding of anatomical biomechanics and the relationship between healthy movement, harmony and beauty. Flavia helps her students to rediscover the beauty and deep sense of wellness that comes from moving their body in a way that respects its original design.
Flavia is the creator of Be Beautiful Pilates and the 10 Tools for Grace Secrets. The 10 Tools for Grace Secrets enable the body to move in everyday life with effortless grace, bring health to the musculoskeletal system and create a sense of serenity in the soul.
In 2012 Flavia was honored in New York magazine’s Best of New York issue for Best Pilates Studio and on I-Italy.org.
Noemi Di Gregorio‘s love story with Pilates started when she was recovering from a hip injury. Pilates helped her to realign her body and move in a more efficient and healthy way. Ever since, she has dedicated herself to teaching Pilates in a holistic way, to help clients develop physical strength and peace of mind.
Noemi has been moving and working with her body all her life.
Originally from Switzerland, Noemi studied as a professional dancer and figure skater, performing in different productions and short movies in Europe, Asia, Canada and the U.S (www.noemidigregorio.com).
As a dancer and choreographer she developed a more detailed, subtle way of working with her body. Her practice of Yoga, Feldenkrais, Franklin, Pilates and Reiki also facilitated the deep understanding of the body.
In all of these pursuits, Noemi learned the discipline and hard work of an athlete. But being a dancer and figure skater is not only physical work; it also requires mental and emotional strength. Noemi developed a strong body-mind connection that helped her being a better performer, teacher and person.
It is this passion for movement and the connection of the mind and body, which Noemi Di Gregorio strives to pass on to her clients.
Learn more
starting Nov 6 2013Wednesdays 6:30 – 8 pm