Mar Creation Inc. and CRS invite you to a one-time performance on Friday, June 17, 2016 at 7:30 pm at CRS, featuring live music by three members of the multiple Grammy winning Maria Schneider Orchestra — recent collaborators with David Bowie on his 2016 single, “Sue (Or In A Season of Crime)” —.and live painting by internationally renowned Japanese calligrapher, Setsuhi Shiraishi. Shiraishi, currently on a US tour, will create a mixture of conventional and modern calligraphy accompanied by Jay Anderson (bass), Scott Robinson (sax), Gary Versace (accordion).

Calligrapher Setsuhi Shiraishi specializes in shodo, a form of Japanese calligraphy and is famous for creating large-scale works in a performance setting. Having been interested in calligraphy during her childhood, Shiraishi became a calligraphy master at 22 years old. She is pursuing her own unique style of calligraphy while expressing the world of traditional calligraphy. She has toured widely in Europe and Asia and recently in the United States, attracting many fans from around the world through her live collaborative performances with music.

Setsuhi has given calligraphy performances at various places including the private salon Diners Club Ginza Lounge in Tokyo, the Mandarin Oriental Hotel Tokyo (at the 60th anniversary event of the launch of Fissler’s pressure cookers), and the British Museum in London. She also held a joint performance with the London Improvisers Orchestra, participated in an art fair in Paris, and held personal exhibitions in both Paris and New York. Also in New York, Setsuhi conducted a calligraphy workshop and performed in both a jazz club and an art gallery with Jay Anderson and Frank Kimbrough of the Maria Schneider Orchestra as well as jazz horn player Adam Unsworth. 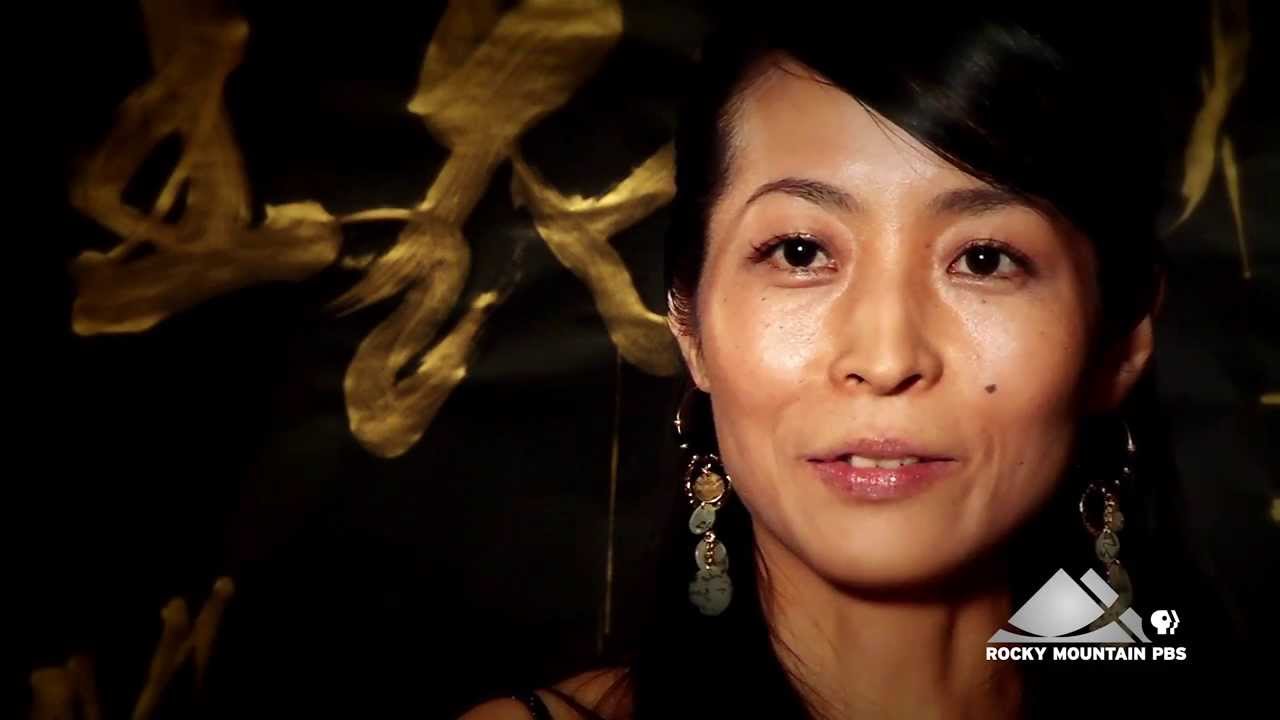 In addition, Setsuhi calligraphed the title on a CD cover for Jiang Xiao-Qing, a world-famous player of the traditional Chinese “guzheng” string instrument.

Setsuhi collaborates with accessory designer RYONA to create 縁 (“en”), their unique brand of calligraphic accessories. The 縁 (“en”) brand is sold at limited-time stores at the Shibuya Hikarie in Tokyo and the Abeno Harukas Kintetsu Main Store in Osaka, and is now permanently sold at the Shizuoka Isetan Department Store in Shizuoka, Japan.

Setsuhi holds her own calligraphy salon at the art space and cafe, Sakaiki, and holds regular calligraphy lessons in Omotesando.

One of today’s most wide-ranging instrumentalists, Scott Robinson has been heard on tenor sax with Buck Clayton’s band, on trumpet with Lionel Hampton’s quintet, on alto clarinet with Paquito D’Rivera’s clarinet quartet, and on bass sax with the New York City Opera. On these and other instruments including theremin and ophicleide, he has been heard with a cross-section of jazz’s greats representing nearly every imaginable style of the music, from Braff to Braxton. Primarily a tenor saxophonist, Scott placed directly below the great Sonny Rollins in this year’s DownBeat Readers Poll. Scott has been heard numerous times on film, radio and television, and his discography now includes more than 240 recordings. His releases as a leader have garnered five-star reviews from Leonard Feather, Down Beat Magazine and other sources worldwide, and have appeared in many “Best of the Year” lists. Scott’s collaborators on disc have included Frank Wess, Hank Jones, Joe Lovano, Ron Carter, and Bob Brookmeyer, and he has been a member of Maria Schneider’s Orchestra for twenty years.

A busy traveller, Scott has performed in some forty nations, once completing tours on five continents in a three-month period. He has performed in such diverse and prestigious venues as Carnegie Hall, the Village Vanguard, the Library of Congress and the Vienna Opera House. His performances for dignitaries worldwide have included a U.S. Presidential Inauguration and a command performance honoring the birthday of the king of Thailand. Scott’s group was selected to be the closing act at the Knitting Factory’s Sun Ra Festival in New York City. Scott has also written magazine articles and liner notes, and was an invited speaker at the Congressional Black Caucus Jazz Forum in Washington, D.C.

Scott has been a staunch advocate for creative music around the world. He was selected by the US State Department to be a Jazz Ambassador for 2001, completing an eight-week, eleven-country tour of West Africa performing his arrangements of the compositions of Louis Armstrong (later featured on his CD Jazz Ambassador). In 2012, Scott served as artist-in-residence at the week-long Ancona Summer Jazz Festival in Italy. He is currently serving each June as musical host of the annual Louis Armstrong Jazz Festival in Hungary.

Scott’s many works as a composer cover a very wide range, from solo performance pieces, jazz tunes and songs, and chamber works such as his Immensities for Large Instruments, on up to large-scale compositions for wind band, symphony orchestra, and even combined orchestras.

The son of a piano teacher and a National Geographic writer/editor, Scott Robinson was born on April 27, 1959 in New Jersey, and grew up in an eighteenth century Virginia farmhouse. While in high school, he received the “Louis Armstrong Award,” and the “Best Soloist Award” from the National Association of Jazz Educators. In 1981, he graduated from Boston’s Berklee College of Music, and a year later became, at 22, Berklee’s youngest faculty member.

Since moving to New York in 1984, Scott has been awarded four fellowships by the National Endowment for the Arts, and participated in a number of Grammy-nominated and Grammy-winning recordings. He has been profiled in new editions of the Encyclopedia of Jazz and Grove’s Dictionary of Jazz, along with books by Royal Stokes, Nat Hentoff and others. In 1997, a 4-minute CNN program featured Scott and the giant contrabass saxophone which he used on his CD, Thinking Big. Scott has been the winner of a number DownBeat Critics Polls and Jazz Journalists Association awards in recent years.

Now a resident of Teaneck, NJ, Scott has constructed a studio/laboratory for sonic research, containing an astonishing assortment of instruments and devices. His first solo and collaborative recordings from this facility have begun to appear under his own ScienSonic Laboratories imprint. ScienSonic Laboratories, LLC has released some highly creative and far-reaching projects including Nucleus,  Creative Music for 3 Bass Saxophones, and Live at Space Farms featuring longtime Sun Ra saxophonist Marshall Allen. In 2012, ScienSonic’s recordings were certified by the Space Foundation as Certified Space Imagination Products, entitled to bear the Foundation’s certification seal. Projects from ScienSonic Laboratories include recordings with Frank Kimbrough, Emil Viklicky, Marshall Allen, Henry Grimes and Roscoe Mitchell.

Under the Doc-Tone imprint, Scott recently released Bronze Nemesis, a CD featuring 12 compositions based on the exploits of 1930s pulp adventure hero Doc Savage. This project, ten years in the making, was greeted with extensive press coverage in the New York Times, Wall Street Journal, DownBeat and elsewhere. The group, known as the “Doctette”, will perform at this year’s Newport Jazz Festival.

An endorsing artist for Vandoren reeds and mouthpieces since the mid-eighties, Scott has recently been signed to Denis Wick of London as an artist/endorser of their products for brass.

A respected performer in all areas of jazz, from traditional to avant-garde, Scott Robinson has arrived at his own unique musical voice which, as once described in a Northsea Jazz Festival program, “combines solid foundations with great daring”.

Bassist/composer Jay Anderson is among the most versatile and respected jazz artists performing today. Born in Southern California, Anderson began playing acoustic bass at the age of twelve. Throughout junior high, high school, and college, Anderson won numerous awards for excellence in both jazz and classical music. One week after receiving a Bachelor’s Degree in Performance from California State University at Long Beach, Anderson was asked to join the Woody Herman Orchestra. After touring with the “Herd” for a year, he was called by Carmen McRae and performed with the legendary singer for the next two years.

In 1982 Anderson made the decision to move to New York City. Since moving East, he has continued to perform and record with some of the most important names in jazz. Anderson has been a regular member in the bands of Red Rodney & Ira Sullivan, Michael Brecker, Toots Thielemans, Maria Schneider, Vic Juris, Bob Mintzer, Michael Franks, Eliane Elias, Bennie Wallace, Lew Tabackin, Steve Khan, Lynne Arriale, Stanley Cowell, and was with Joe Sample from 1992 to 2006.

In addition to being a highly sought-after sideman, Anderson is a proven voice in his own right. His two original recordings on the DMP label, “NEXT EXIT” and “LOCAL COLOR” have received critical acclaim both in the U.S. and abroad. Jay currently co-leads the critically acclaimed group BANN featuring Seamus Blake, Oz Noy and Adam Nussbaum.

Anderson has been the recipient of the NEA grant for composition and two Meet the Composer grants. More than twenty of the recordings he has been featured on have been nominated for the Grammy Award. He has conducted clinics around the world and is a Professor of Jazz Bass Studies at the Manhattan School of Music in New York City.

Versace was voted a “rising star” on the Hammond organ in the last three Downbeat critics polls, and was the subject of a feature article in the July 2004 issue of Keyboard magazine.

Versace has been a featured soloist on several critically acclaimed recordings of recent years: accordionist on Maria Schneider’s Grammy-winning recordings “Concert in the Garden” and “Sky Blue” and as the pianist on John Hollenbeck’s Grammy-nominated large ensemble recording, “A Blessing.”

Over the past five years, Versace has appeared as a leader for the Criss Cross and SteepleChase labels, and as a sideman on over 50 recordings with artists on various labels including Palmetto, ACT, Omnitone, Songlines, Pirouet, High Note, Justin Time, ArtistShare, Fresh Sound, Kind of Blue, and many others.