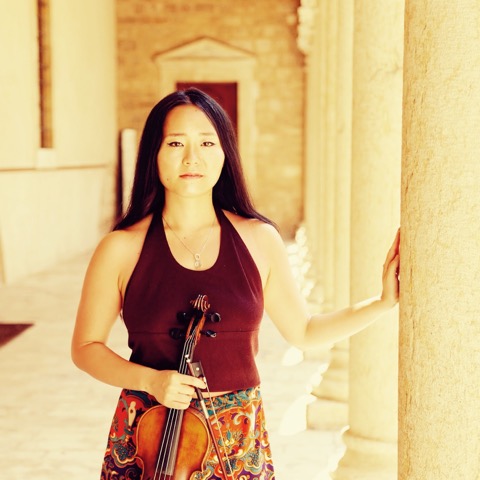 Boarder-crossing violinist Megumi Saruhashi presents “From the Music Room in the Inner Space – Arabian Fairies,” an evening of her original compositions in the award-winning White Room at CRS on Saturday 1/27/18 from 7 – 8:30 pm. Joining her are Alon Nechushtan on piano, Brian Prunka on oud, and Dan Kurfirst on percussion. Tickets are $25 and are available online at https://www.brownpapertickets.com/event/3231800.

Megumi Saruhashi’s music is ignited by a wide range of influences, including Arabic music, jazz, classical, tango, gospel, minimalism and many more. Focusing on the intersections and connections between music and the soul, Saruhashi uses her musical training to form new and unexpected alliances between musical genres. Believing herself to be a conduit that synthesizes the musical and spiritual realms, Saruhashi refers to herself as a “hollow bone.” She strives to draw out the consciousness of listeners and connect on a deeply spiritual level that cuts across cultural and sonic barriers.

“My ability to flow between different musical genres and cultures means I have the skill to create a musical alchemy. Responding to the whispers of the internal world of spirit, I draw this into the present moment. Being able to be a hollow bone – a flute of the music of God – and share that music that I receive from the source and to be able to share that with the world is my passion. I’m a transmitter of God, as all of us are.” — Megumi Saruhashi

Megumi is a native of Japan and currently resides in Brooklyn. She has performed in almost every corner of the world from Carnegie Hall to Lebanon and for audiences as large as 60,000. Every year she travels to the Middle East to provide musical workshops and concerts at refugee camps, and her work has been featured on ABC, CBS, and Fox News. http://www.megumisaruhashi.com

Alon Nechushtan’s music adventures has brought him to various far corners of the globe such as the Yokohama ‘Rejoicing Sounds’ Festival in Japan with his contemporary orchestral compositions, The Manila Cultural Center of the Arts, with his Clarinet Concerto for the Philippines Philharmonic Orchestra, The Sao-Paolo Brazil Jewish Music Festival with his groove based Quintet Talat, Toronto and Montreal with his words beyond Jazz Trio and Tel Aviv New Music Biannale with his Compositions for Large Ensemble. A resident of New York City, Alon has performed in venues such as Carnegie Hall, Jazz @ Lincoln Center, Central Park Summer Stage, The Blue Note Jazz Club and the Kennedy Center with his projects as a band leader of various groups or as an in demand sideman. In October 2015 the Kennedy Center comissioned from Alon Nechushtan a new piece for Billy Strayhorn Centennial Celebration, followed by a Far East tour in China and Phillipines, along with Jazz Festivals in Belo Horizonte-Brazil, Israel. In 2017 the Smithsonian Museum in Washington, D.C commissioned from Alon Nechushtan a new program of Thelonious Monk’s less known compositions. All About Jazz magazine called him “A fantastic pianist-composerwith abundant chemistry and boundless eclectisism”, while DownBeat Magazine  recognizes “A talent to watch, with a surfeit of ideas, an unbridled spirit and bold,two-fisted sense of Architecture.” http://musicalon.com

Prior to moving to Brooklyn in 2003, Brian Prunka was living and performing in New Orleans, where he spent his musically formative years honing his musical skills immersed in the jazz community. While his background was in traditional and modern jazz, as well as the rock and blues music of his teenage years, Brian has always found himself drawn to a wide range of music without regard to boundaries, national or otherwise. In the late 90s, fate introduced him to the oud, and he had an instant and profound connection with this storied instrument. A chance conversation led him to begin studying with the renowned virtuoso Simon Shaheen and ultimately to becoming involved in the Arabic music community as well. He has sought over the years to find ways to bring together the essential characteristics of all the music he loves through both his improvisational style and his many diverse compositions. These days equally proficient on both guitar and oud, Brian composes and performs jazz and middle-eastern influenced music with his own projects (such as the Near East River Ensemble) and with musicians such as Michael Bates and Simon Shaheen. He currently performs with Nashaz, Sharq Attack, Zikrayat, the Bil Afrah Project and others. He has performed throughout the U.S. and internationally with Simon Shaheen, Michael Bates, Ravish Momin, the New York Arabic Orchestra, The Vancouver International Orchestra, Zikrayat, The Near East River Ensemble, and others. In addition to national and international events, he has performed in New York at The Stone, Tonic, the Knitting Factory, the River to River Festival, Symphony Space, Alwan for the Arts, Trinity Church, Rooftop Films, Bronx River Arts Center, Bethlehem MusikFest, the Abode of the Message, and CBGBs, among others. He has received grants from the Brooklyn Arts Council and NY Dept. of Cultural Affairs, and was an instructor in oud and Arabic music theory at Simon Shaheen’s Arabic Music Retreat from 2012-2014.Brian Prunka currently performs on D’angelico and Gibson guitars and Fender amplifiers. http://www.brianprunka.com

Dan Kurfirst is an NYC based percussionist, composer and improviser. Born and raised in Brooklyn, NY, his music is a product of his good fortune to have been brought up amongst people of all different cultures and master practitioners of varying musical styles. He has formally studied the Drumset with Nasheet Waits, Tariq Snare and Gregg Bendian. He has studied percussion under the tutelage of Shane Shanahan and Hakan Kaya. He has performed extensively in the New York City world music and improvised music scenes for years and has performed with various groups throughout Europe, India and the Middle East. The beautiful human beings that he has had the pleasure to work with are too numerous to list in total, but some of them are: Gabriel Marin, Matt Darriau, Brandon Terzic, Adam Rudolph, Daniel Carter, Ras Moshe, Daro Behroozi, Kane Mathis, Brian Prunka, Abraham Mennen and Ben Cohen. Dan leads Spheric Sound Unit, a group dedicated to exploring cultural syncretism through music. He also co-leads Ensemble Fanaa, a trio which explores the intersection between African American, North African and Middle Eastern musical traditions. He recently worked as Musical Director for the Childrens Museum of Manhattan’s America To Zanzibar exhibit, helping to develop a touchscreen application for the “A Children to explore music of the Islamic world from India to Egypt to Indonesia. http://dankurfirstmusic.com