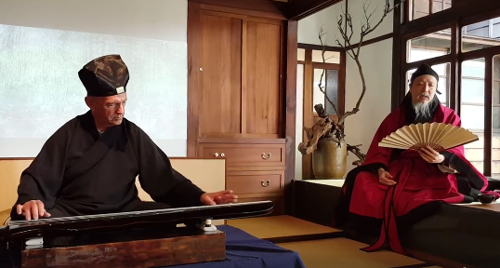 The New York Qin Society presents its founding president, Master Jung-Ping Yuan, now visiting from Taiwan, in a concert of music for the guqin silk-stringed zither on Saturday August 27, 2016 from 6 – 8 pm.

The guqin, said to have been played by Confucius, has been enjoying a renaissance since UNESCO proclaimed it a Masterpiece of the Oral and Intangible Heritage of Humanity. The concert consists of famous masterpieces from both the ancient and traditional repertoire.

The first half of the concert will include performances by Yip Ming-Mei playing Flowing Streams (Liu Shui) and John Thompson playing Song of the Fisherman (Yu Ge) and Song of Chu (Chu Ge), both with short introductory qin songs.

Admission: $20 (Tickets will be available at the door.)

Entrance to venue only after 5.45; please arrive before 5.55.
Please notice that the concert facility requires that guests be quiet when entering and leaving.