The first work on the program, Yut Nori, is an experiment to create a music and dance performance by playing with the traditional Korean board game Yut Nori (윷놀이). The Yut game board depicts icons representing four gods, 36 constellations and five animals encircling a star that represents the eternal. The audience will play the game, and their movement around the board will bring us into contact with the choices, chance encounters, friendships and challenges we meet throughout life — which the performers will then translates into music and dance!

The second work on the program, 나비 Butterfly II Conceptual Transformation Improvisation (2018.9.14), is about the soul of being hurt and lost. The image of the butterfly connects the poem “Mirror” by the avant-garde Korean poet Yi Sang (September 14, 1910 – April 17, 1937) with one of the victims who drowned in the sinking of the South Korean vessel Sewol that took the lives of more than 200 high school students on April 16, 2014. The work also “mirrors” and reflects the history of Jeju Island and the artist’s personal memories. This is the fifth such transformation of this poem into music by Hyo Jee Kang and is part of her conceptual transformation series, in which she explores transformations from and to texts, notes, scores, images, paintings, feelings, stage arts, lights and voices.

CROSSING BOUNDARIES — ECHOES OF KOREA, curated by gamin (piri, taepyeonso, saenghwang), provides musicians from Korea with space to experiment with the new, to collaborate across genres, cultures and disciplines, and to explore new ways of using creative communication to facilitate a shared practice of presence. The goal is to dissolve boundaries between performers and audiences, the traditional and contemporary, classical and experimental, Korea and the world. Participants in the series are encouraged to incorporate meditation, improvisation, and collaborations with visual and movement-based artists as well as musical artists from different traditions.

Vol. 3 of the CROSSING BOUNDARIES — ECHOES OF KOREA series will be:

Hyo Jee Kang has been focusing on transformation between media and objects to create a new art form. She works with media artists and live electronic performers presenting improvisation and recomposed composition as well as her originals. Her activity as a composer, performer, creator and improviser has been featured throughout the world in Germany, Spain, Italy, Korea, Japan, USA, Israel, and so on. Hyo Jee currently resides in New York City and serves as a faculty at Seoul National University. In May 2018, she gave her solo performance with great success at Lincoln Center, including the Conceptual Transformation Performance “Pyung Yang.”

This August she was one of 12 artists from around the world selected to particpate in Seminar in Taipei, a platform for in-depth exchange in both theoretical and practical fields, at the 2018 Taipei Arts Festival X in Taiwan. Seminar in Taipei is an initiative of Pro Helvetia, the Swiss Arts Council, in partnership with the National Culture and Arts Foundation of Taiwan, Korea Arts Management Service, the National Arts Council of Singapore, and the Arts and Theatre Institute of the Czech Republic, realised in collaboration with the Taipei Arts Festival. Hyo Jee’s YouTube channel is youtube.com/hyojeekang.

gamin is a yisuja of the Important Intangible Cultural Asset No. 46 for piri and daechita. gamin is one of the most celebrated piri, taepyeongso (Korean traditional oboe family) and saengwhang (ancient wind-blow instrument) performers in Korea today. From 2000 to 2010, she was a member and assistant principal player of the Contemporary Gukak Orchestra at the National Gukak Center, the hub for training and preserving Korean traditional music. Today, she experiments and expands her musical realm to interdisciplinary projects in collaboration with international artists. She was a recipient of residency program grant from the Korean Ministry of Culture, Sports, and Tourism and Asian Cultural Council (ACC) of Rockefeller Foundation, has toured for lecture concerts at Harvard University, Dartmouth University, University of Pennsylvania and etc. She received her DMA in traditional music at Seoul National University and published the book “Advanced Techinuqes of PIRI” by Minsokwon, in Seoul. gamin-music.com 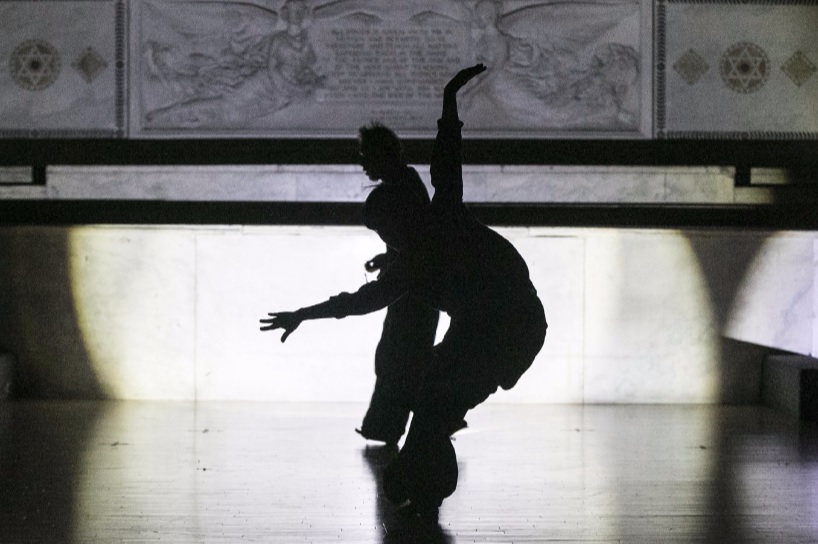 Satoshi Haga and Rie Fukuzawa have been collaborating as binbinFactory since 2010 and have been presented by many venues including DanceNow (2010-2016)/ Dance Conversations at the Flea/ Downtown Dance Festival/ Movement Research at Judson Church/ The Pearl at the Schermerhorn Theater/ and The Williamsburg Art & Historical Center.

binbinFactory’s first solo concert was presented at 92nd Street Y’s Harkness Dance Center and their first creation “THREAD,” won 2nd place the same year at “THE A.W.A.R.D. Show!” presented by Joyce SoHo New York which included a grant by The Joyce Theater Foundation and a generous contribution from Scott Kasen to further create and expand their creativity. binbinfactory.org

Born and raised in Japan, Rie Fukuzawa received her Master of Arts in dance education from Ochanomizu University, Tokyo. She came to New York in 2003 to study dance with a “Overseas Study Program Scholarship for Artists” funded by the Japanese government. Her choreography has been presented at CRS, Peridance center, Joyce SoHo, Movement Research at Judson Church, Fine Field Art Festival 2008, Studio series/Body-Arts Laboratory 2009, E-Moves 15 at Harlem Stage and various venues in Tokyo.

Satoshi Haga grew up in rural Japan where he never thought he would ever become interested in dance. As a dancer, his works have been presented by venues including Aaron Davis Hall, Dia Art Foundation, The Madarts, Joyce SoHo, P.S. 122, Movement Research, 92nd street Y, Mulberry Street Theater, DanceNow [NYC], Brooklyn Arts Exchange, Japan Society in New York and Jacob’s Pillow, The Yard in MA, and most recently at the Bargemon Festival in France. He has been collaborating with Jen Shyu (composer & Vocalist) and performing at Roulette, Jazz gallery and other music venues in New York, as well as choreographing and directing at the Tokyo Motor Show. Satoshi is also an artist and occasionally incorporates his work into binbinFactory’s dance. The Giacobetti Paul Gallery and SoapBox Gallery are where Satoshi has held his solo show of his drawings and sculptures. binbinfactory.org