CRS (Center for Remembering & Sharing) presents VIBRATION: SAORI KANDA art performance with Sufi Dance artist LÄLE SAYOKO on Friday, Dec 6 2019 from 7 – 9 pm. VIBRATION brings together two internationally touring artists known for improvisationally translating music into visual art and movement. In conjunction with the live performance, an exhibition of Kanda’s paintings will be on view in the CRS lobby.

Painting with bare hands, brushes, sometimes throwing paint, 2019 Independent Tokyo Contemporary Art Fair Audience Award Winner SAORI KANDA brings to life delicious large-scale scenes of nature and fantasy inspired by her love of Japanese art (both traditional and modern) as well as the flowing Arabesques to which she was exposed growing up in the Middle East. While SAORI paints, LÄLE SAYOKO, in a free-spirited approach to the Sufi practice known as sema (spiritual listening), follows the music’s vibrations to unfold the ever-flowing movements of nature, such as the opening and closing of a flower dancing in the wind (lâle means tulip in Turkish).

This event is supported by the GLOBUS RYOKAN ARTIST-IN-RESIDENCE program and is one of a series of events in early December featuring Saori Kanda across the city.

The Globus Ryokan Artist-in-Residence program seeks to stimulate cross-cultural dialogue by providing opportunities for Japanese artists to live and exhibit in New York City. The GLOBUS FAMILY has long been associated with cultural interchange between Japan and United States. They have sponsored events at eminent institutions including Japan Society and Asia Society. Their scope spans dance, theater, cinema, art, craft, and performance groups. For more information, visit: www.nycwashitsu.com/ A visual artist and live painting performer presented around the world by numerous festivals, museums and companies (Nissan, Maserati, Cartier, etc.), Saori Kanda uses her entire body to feel the waves of music and draw her unique piece of art on a large canvas as if she dances. It is reminiscent of the style of abstract expressionism such as Jackson Pollock and Willem de Kooning.She breathes a life into the canvas. Her work grows and become filled with freewheeling spirits by experiencing the cycle of destruction and rebirth. She, as a painter, becomes a part of her own work and her outstanding performance attracts offers from all over the world.
saorian.com/

Saori Kanda’s work and performance will also be presented in: Läle Sayoko lives to embody and transmit the voice of spirit through music and dance. As CRS resident Sufi Dance instructor, choreographer, performing artist, and musical curator, she loves to welcome people into this holy practice to explore and share their own divinity. She intermittently tours internationally with BELLA GAIA, a live concert blending music, dance, technology, and NASA satellite imagery inspired by the experience of astronauts viewing the earth from space. “Sublime” — Village Voice.

One of the founding members of Japan’s famous SAMANYOLU professional belly dance group in Tokyo, Läle went on to a long solo career performing throughout the northeastern USA and touring with United Kingdom’s Mugenkyo Taiko Drummers on over a 100 city tour encompassing the U.K., as well as Turkey’s Baba Zula. About six years ago, she was forced to retire to support her young daughter through a life-threatening medical crisis. Several years later she discovered that she could whirl as a form of prayer to support her daughter and began studying Sufi Dance with Paris-based Sufi Artist Rana Gorgani. In April 2018 Gorgani awarded her the International Sufi Dance Certification Of Cid UNESCO, granting her authority to teach Gorgani’s method of Sufi Dance training. She currently teaches Sufi Dance classes at CRS every first Thursday of the month from 7 – 8:30 pm and leads the CRS Healing Circles + Whirling Prayer that take place every third Thursday of the month from 7:15 – 9 pm. facebook.com/lale.sayoko

I let my body move with the energy of that moment

I let my body dance and paint

And I express the primitive joy of human being

Transcending nationalities, races, sexes, and ages of those who I encounter

I share the joy and paint the light of joy

As the moon gently shines

I believe the light revives upon any darkness 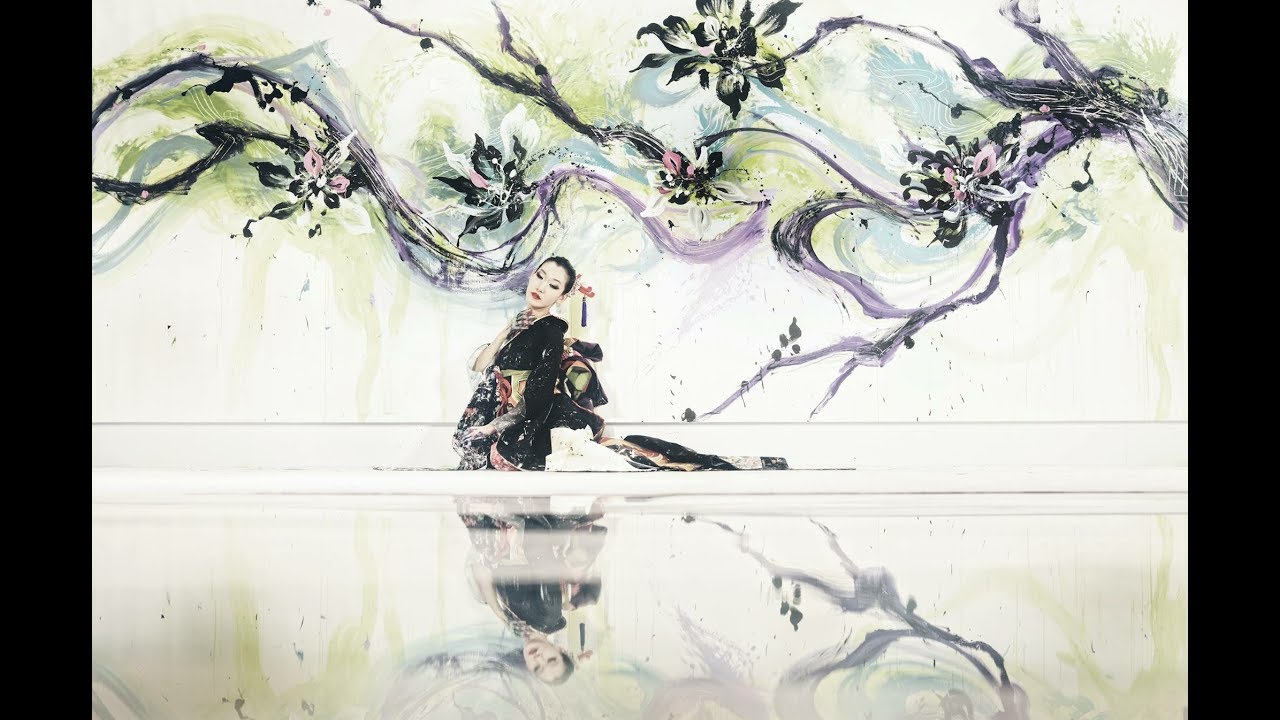 To draw life. To draw throughout her life. Or to draw staking her life.

You may take her words however you can.

For her, it is not just to create artworks but it is to record her encounters and her growth. What you see in her work always is a festival of lines and colors that breathes heavily holding enthusiasm within. It is like a flower, like a body, or like a landscape of an unknown country.

Who is Saori Kanda that creates this?

Having spent her childhood in Baghdad and Dubai, she says she always had a longing for Japan, a far country from where she was. Certainly, in her work, it seems that influences from Arabic world and elements of Japanese roots are inseparably interwoven in her depiction of human body, detailed patterns, and the curves of her flowing brushstrokes.

She does live with unbridled enthusiasm. She draws, longs for encounters with people and places, travels, talks, listens, gets worried, breaks, laughs, creates, sheds tears, lives, communicates, and again, draws. With all her strength and all her heart.

It does not matter if it is a live painting performance, a creation of tableau, or a collaboration with other fields such as music, fashion, and so on. She does what she does.

She jumps into the encounter throughout her body, communes with it, and devotes herself to it. Then, she lets her brushes run.

The ‘heat’ that is boiling in all Saori Kanda’s work is the ‘heat’ liberated in a chemical reaction of the encounters with people, things, and places throughout her life.

LIFE PAINT. To live out her life is to draw.