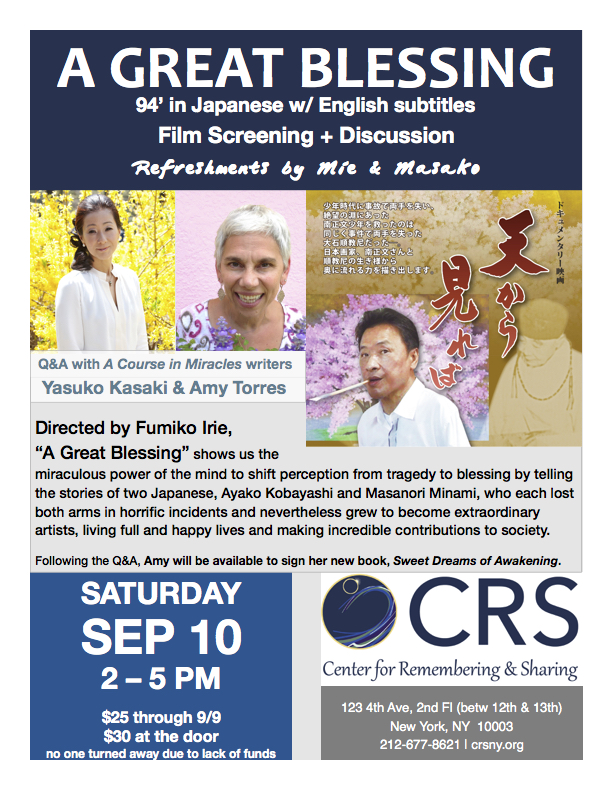 CRS (Center for Remembering & Sharing) invites you to screen and discuss the inspirational documentary “A Great Blessing” (94’ in Japanese w/ English subtitles) with CRS Founder Yasuko Kasaki and visiting A Course in Miracles teacher Amy Torres. Directed by Fumiko Irie, “A Great Blessing” shows us the miraculous power of the mind to shift perception from tragedy to blessing by telling the stories of two Japanese who were maimed in horrific incidents and nevertheless grew to become extraordinary artists, living full and happy lives and making incredible contributions to society.

Following the screening, Yasuko and Amy will share their thoughts about the film and miracle mindedness and take questions from the audience. Refreshments will be served and Amy will be available to sign her new book, Sweet Dreams of Awakening.

Amy Torres is a spiritual teacher who was born and raised in New York City. As a young child, she spontaneously and effortlessly detached from personal identity several times and basked in the Natural Self. In 1998, after faithfully practicing all 365 lessons of the workbook practice in A Course in Miracles, Amy had a spiritual awakening. Born with the ability to see deeply, she has been described as having a “penetrating gaze.” For those who are ready to awaken, she will help you see right through yourself. Her popular Ask Amy column runs in Miracles magazine; her new book, Sweet Dreams of Awakening, will be available in the CRS bookstore; her e-course, Workin’ the Workbook, offers more than 365 in-depth videos to support the ACIM Workbook practice. For a free subscription to her ACIM e-newsletter, The Unlearning Classroom, visit www.amytorresacim.com

Yasuko Kasaki is an internationally beloved spiritual writer, counselor, healer, lecturer and translator from Tokyo, Japan. The founder of CRS (Center for Remembering & Sharing), the first and only spiritual center devoted to the teaching and practice of A Course in Miracles (ACIM) in New York City, she is widely recognized as the person most responsible for the spread of ACIM throughout Japan. She is the author of 15 of books in Japanese about ACIM, as well as numerous novels, short stories, essays and collections of photographs. Her translations of the ACIM Workbook and books by ACIM writers Jon Mundy, Gabrielle Bernstein and David Hoffmeister and works by poet Maya Angelou and others have also been published in Japan. She is currently translating Mari Perron’s A Course of Love and the ACIM Original Edition into Japanese for publisher Natural Spirit, Inc.

ABOUT THE DIRECTOR FUMIKO IRIE

Based in Osaka-Japan, and starting off as a fashion designer, she became a professional aroma therapist and began teaching aroma therapy. After various experiences in her life, she happened to get inspired to produce a film so as to fill the universe with gratitude and that being her mission in life. She did everything such as shooting, interview, editing video, writing a song for the ending song and singing it herself to create the film. The title is “The Miracle of the Gifted Quarter – Life’s Truth revealed”, which contains many scenes in which Katsuko Yamamoto, a teacher at a special-needs school, communicates with students.

Within two years after the completion of the film, it spread abroad with English subtitles. And a hundred and twenty thousands people watched it by the end of 2011. It was invited to the Japan Film Festival in Los Angeles and received a standing ovation at a screening in Columbia University, which is the summit of video technique.

She completed the second film “The Miracle of the Colored Light” in 2008, and also completed the third film “A Great Blessing” in 2011. In the same year she also appeared in the Murakami Kazuo film “Switch” by Suzuki Naoki.

On National Human Rights Day in 2013, “The Miracle of the Gifted Quarter” was shown at the headquarters of the United Nations in New York. In total, the film has been played at 1,800 places in 18 different countries and has reached 180,000 viewers.

Now she runs workshops all over the world on what she developed, “Hesodo.”